What Are The Different Types of Solar Panels? 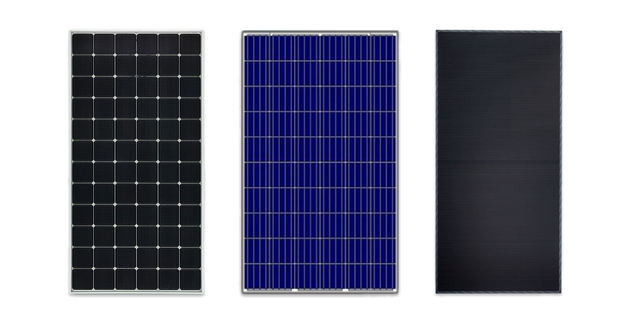 Types of solar panels: which one is the best choice?

The solar cells that make up the panel determine which type it is. Each type of solar cell has different characteristics, thus making certain panels better suited for different situations.

We’ve created a complete guide to mono crystalline, polycrystalline, and thin film solar panels to help you decide which type is right for your home.

Mono crystalline silicon solar cells are manufactured using something called the Czochralski method, in which a ‘seed’ crystal of silicon is placed into a molten vat of pure silicon at a high temperature.

This process forms a single silicon crystal, called an ingot, that is sliced into thin silicon wafers which are then used in the solar modules.

Fun fact! There is more than one type of mono crystalline solar panel

Nowadays, there are several varieties of mono crystalline solar panels on the market to choose from. Passivated Emitter and Rear Contact cells, more commonly referred to as PERC cells, are becoming an increasingly popular monocrystalline option. PERC cells go through a different manufacturing and assembly process that increases the amount of electricity the cells can produce.

Bifacial solar panels, another mono crystalline technology, can generate electricity on both the front and back side of a module, and are gaining traction in commercial ground-mounted applications.

Similar to mono crystalline panels, polycrystalline panels are made of silicon solar cells. However, the cooling process is different, which causes multiple crystals to form, as opposed to one.

Thin film solar cells are mostly used in large-scale utility and industrial solar installations because of their lower efficiency ratings.

Thin film solar panels are made by depositing a thin layer of a photovoltaic substance onto a solid surface, like glass. Some of these photovoltaic substances include Amorphous silicon (a-Si), copper indium gallium selenide (CIGS), and cadmium telluride (CdTe). Each of these materials creates a different ‘type’ of solar panel, however, they all fall under the thin film solar cell umbrella.

During the manufacturing process, the photovoltaic substance forms a thin lightweight sheet that is, in some cases, flexible.

Thin film solar panels have incredibly low efficiency ratings. As recently as a few years ago, thin film efficiencies were in the single digits. Researchers have recently achieved 23.4% efficiency with thin film cell prototypes but thin film panels that are commercially available generally have efficiency in the 10–13% range.

In order to meet your energy needs, you would need to install more thin film panels over a large area to produce the same amount of electricity as crystalline silicon solar panels. This is why thin film solar panels don’t really make sense for residential installations where space is limited.

The standard temperature coefficient for mono and polycrystalline panels typically falls somewhere between -0.3% and -0.5% per *C. Thin film panels on the other hand, are around -0.2% per *C - meaning thin film panels are much better at handling the heat than other panel types.

Mono crystalline panels are the most expensive of the three types of solar panels because of their manufacturing process and higher performance abilities.

But as we said earlier, the price gap between mono crystalline and polycrystalline panels is narrowing. Now, more homeowners are willing to pay a slightly higher price to get significantly better efficiency and power ratings from monocrystalline panels.

Thin film solar panels have the lowest cost of the solar panel types, largely because they are easier to install and require less equipment. However, they also have much lower performance abilities and require a substantial amount of space to generate enough electricity to power a home.

Plus, thin film panels degrade much faster than other panel types, meaning they need to be replaced more often, which leads to more long-term recurring costs.

Thin film panels have a clean, all-black look. Their thin design allows them to lie flat against roofs, so they are able to blend in more seamlessly. In fact, with some thin film panels, it’s hard to even see the individual cells within the panel. They also tend to have less wiring and busbars, meaning there’s less white space.

However, because they are so inefficient, you would need to cover your entire roof in thin film panels - which may or may not be your style.

Mono crystalline panels have a solid black appearance, making them pretty subtle on your roof. But, the way mono crystalline solar cells are shaped causes there to be quite a bit of white space on the panel. Some manufacturers have worked around this with black packing or shaping the cells differently, but these aesthetic changes can impact both the price and performance of the panels.

Thin film panels tend to have lower wind and hail ratings than mono and polycrystalline panels. So, while thin film panels might look nice at first, one bad storm could cause significant damage.

What is the best type of solar panel for your home?

Although you will be paying a slightly higher price, you’ll get a system with a subtle appearance without having to sacrifice performance or durability. Plus, the high efficiency and power output ratings you get with monocrystalline panels can provide you with better savings over the lifetime of your system.

If you’re on a tight budget, polycrystalline panels might make more sense for you. We do not recommend thin film solar panels for residential installations - their performance and durability don’t make the low cost worth it, and it’s unlikely you’ll have nearly enough space to install the number of thin film panels you would need to cover your household electricity usage.

There are two things that are more important than solar PV cell type when choosing panels for your home: the brand of solar panels and finding the right solar installer.

Going with a high-quality solar panel manufacturer ensures that you’re installing a great product on your roof, regardless of the type of panel it is.

Perhaps the most important thing to consider when going solar is the installer. A solar panel system will be on your roof for at least 25 years, so you need an installer you can trust for two-plus decades! Lifestyle Solar is a local, reputable solar installer with high customer review scores as we give the most personalized customer service on solar projects. Contact us today by email support@lifestyleenergy.com or call us 1 559 228 0229 to learn more about solar.