On June 6th, 2022, President Joe Biden announced two executive actions to boost the U.S. solar installation and manufacturing industries. The first was a Declaration of Emergency to address a shortage of solar panels in the country, which had derailed several gigawatts (GW) of planned utility-scale solar projects. The second was an invocation of the Defense Production Act to increase domestic manufacturing of solar panels and other clean energy technologies. The Biden Administration hopes the two actions will increase U.S. solar manufacturing capacity by 200% over current levels and result in as much as 100 GW of additional solar generation capability over 10 years than if executive measures weren’t taken. Let’s look at the reasons behind the President’s actions, the immediate and long-term effects they’ll have, and the impacts that could occur on the residential solar market.
Going Solar
June 1, 2021 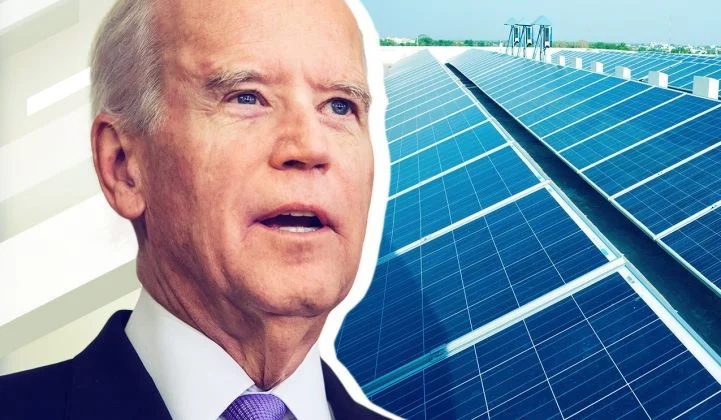 On June 6th, 2022, President Joe Biden announced two executive actions to boost the U.S. solar installation and manufacturing industries. The first was a Declaration of Emergency to address a shortage of solar panels in the country, which had derailed several gigawatts (GW) of planned utility-scale solar projects. The second was an invocation of the Defense Production Act to increase domestic manufacturing of solar panels and other clean energy technologies.

The Biden Administration hopes the two actions will increase U.S. solar manufacturing capacity by 200% over current levels and result in as much as 100 GW of additional solar generation capability over 10 years than if executive measures weren’t taken.

Let’s look at the reasons behind the President’s actions, the immediate and long-term effects they’ll have, and the impacts that could occur on the residential solar market.

What specific actions did the President take, and why?

With an emergency declaration, President Biden directed the Secretary of Commerce to permit for 24 months "the importation, free of the collection of duties and estimated duties... of certain solar cells and modules" from four Southeast Asian countries: Cambodia, Malaysia, Thailand, and Vietnam. He did this in response to a petition from U.S. solar module manufacturer Auxin Solar, which asked the Commerce Department to investigate whether solar equipment from those countries was being sold by Chinese companies in an attempt to circumvent existing anti-dumping tariffs.

Based on the fear that tariffs could arise from the investigation, most solar manufacturers in the countries in question ceased shipping products to the U.S. in the spring of 2022. This had a major effect on estimates of solar installations. If the tariffs had been implemented, it would have meant a 50% decrease in solar installations for the rest of the year. Now that there will be no tariffs for 24 months, the companies will restart their production lines, but it will take time for the industry to catch up and many projects will still be delayed.

In concert with the emergency declaration, Biden announced he would invoke the Defense Production Act (DPA) in order to spur new U.S.-based clean energy manufacturing. This is designed to ensure the United States has enough manufacturing capacity to meet the demands of the solar installation industry once the 24-month halt on the new tariffs is up.

The move to invoke the DPA means that the federal government will enter into special multi-part contracts with solar equipment manufacturers. These contracts, called "Master Supply Agreements", will assure manufacturers that the government will purchase a certain amount of solar panels, and at the same time require that those panels are made with a certain percentage of U.S.-sourced materials and labor.

In addition to solar equipment, the Biden administration has also invoked the DPA to increase domestic manufacturing of other clean and energy-saving technologies like heat pumps, insulation, equipment for making clean fuel cells, and grid infrastructure. Together, all of Biden's actions are designed to accelerate the country's switch to clean energy. But will they?

What effects will these actions have?

The most immediate effect of Biden’s executive actions is the restart of many large-scale solar projects that had been postponed while the Commerce Department investigation loomed. One expert estimates that the investigation had stalled 6 GW of solar projects and that Biden's Emergency Declaration would lead to 2 to 3 GW of those stalled projects getting back on track.

By 2023, the manufacturing facilities in the four target countries will be back to full capacity, and the utility-scale solar pipeline will be restored. Stateside manufacturing should also increase, thanks to the DPA order promising companies the federal government will buy their products if certain conditions are met.

To be clear, Biden’s order has not ended the Commerce Department’s investigation — only delayed its likely consequences for 24 months. If the investigation finds that Chinese companies are circumventing tariffs and decides to impose new tariffs on imports from the four countries in question, those tariffs will take effect in mid-2024. U.S. solar manufacturing capacity would have to be in better shape by then.

Before Biden’s recent orders, industry analysts at Wood Mackenzie estimated that the U.S. would see demand for around 30 GW of solar in 2023, and more than 50 GW per year by 2030. 80% of the solar panels that are used in domestic installations come from outside the country. If the Commerce department levies major new tariffs on imported solar panels, manufacturers will likely look to site new plants in the U.S.

As of late 2020, U.S. solar manufacturers produced (and sold) 7.5 GW of solar panels per year. In order to make up the difference in domestic supply and demand, the U.S. would need to see at least 15 GW of new manufacturing capacity come online by 2024. That's exactly the number Biden's statement estimates.

In addition to existing demand, the Biden administration says the U.S. government will buy at least 10 GW of American-made solar panels over the next 10 years, and it wants state and local governments to join in, estimating a potential 100 GW of government demand for solar in the next decade.

With the likely future of tariffs on all imported solar cells and modules, demand for domestically produced solar modules will likely be high enough to attract a lot of new investment in U.S.-based manufacturing facilities. In the long term, that could mean lower prices and more availability. But will this mean lower prices for the average American consumer?

What does this mean for homeowners?

Probably not much, at least initially. Most U.S. home solar installations already use American-made solar panels from Qcells, Silfab, Jinko, and others. Those manufacturers assemble modules in various places around the country, but even they purchase the solar wafers and cells used in those modules from manufacturers in the four countries involved in the Commerce Department investigation.

The 24-month pause on new tariffs will mean U.S.-based manufacturers can continue to import materials to make solar panels, just the same as they always have, and sell their products for about the same prices as before the investigation. But with the threat of possible tariffs coming in 24 months, these manufacturers will have to adapt to making their own silicon wafers and cells, or sourcing these components from U.S. manufacturers.

That adaptation means that domestic manufacturers will have to maintain or even raise their prices in the coming years as wafer and cell manufacturing in the States ramps up. In the long term, the switch to domestic production of the materials needed to make solar panels will have numerous benefits to the U.S. in terms of jobs, energy security, and corporate income, but lower costs for consumers are not in sight.

Combined with the fact that the federal solar tax credit is set to step down next year and disappear after 2023, now seems like a pretty good time to install solar panels. If you want solar panels some time after 2023 and want them to be affordable, call your representatives and ask them to support the Build Back Better agenda, which contains provisions to provide new funding for solar and make the tax credit fully refundable.

Everything You Need to Know About Organic Solar Cells